Travels with Charley by John Steinbeck 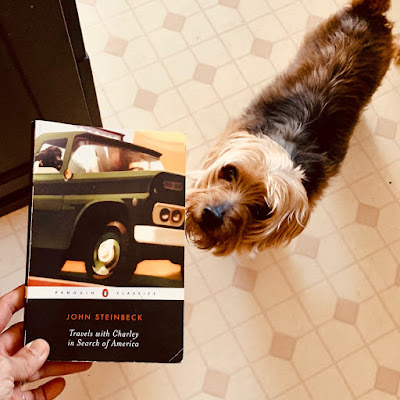 After teaching painting for three days in Shreveport, Louisiana, I finished reading Travels with Charley by John Steinbeck on the airplane, on my way back home to Santa Ana, California. There were two points when I almost lost it on the plane.

ONE: THE CHEERLEADERS
One was when Steinbeck in 1960 visits William Frantz Elementary school in New Orleans to witness firsthand, The Cheerleaders. Cheerleaders not with cheers but with jeers. Cheerleaders: A group of white mothers of white school children who gathered every day to taunt and bully black children as they were entering or exiting the school. Two nights before, I head heard Kamala Harris talk about a little girl who had been bused to attend a public school as part of a program to end segregation. She explained that that little girl was her.

TWO: THE URGENCY
Two was when Steinbeck picks up a black hitchhiker and they start to talk about Martin Luther King, Jr., and the non-violent movement he was leading to achieve racial justice. The young black man expresses respect for King and also a restlessness about the movement saying: "It's too slow ... It will take too long."

RAPPORT
I entered my recent experience in the Deep South not just as an artist and teacher but as an anthropologist. To ask myself if it's possible to build rapport with people from a red state. Cause isn't it when I can greet a person with face-to-face, skin-to-skin, eye-to-eye ... that something kicks in beyond what usually kicks in on Twitter and Facebook? Super tailored experiences where a table can be set for people from different backgrounds to eat a meal, raise a glass, share a joke, open up, and make the art. That was indeed my experience.

Steinbeck set out to see America firsthand, to meet people in places he had heard about but not visited directly. He saw and heard and touched and tasted it all ... the good, the bad, the heartbreaking, and the nauseating ugly.

The morning before I left, I was having breakfast in the hotel lobby where they had two television sets going. One had Fox News on. The other had CNN on. An effort to be fair, I suppose, but a practice that reflects how we Americans would prefer to remain fractured than to heal.

I'M A WITNESS
I witnessed a white family that grabbed a table in the middle of the room. Neither Fox nor CNN. We exchanged smiles. And then I heard the father of the family tell his three adorable young children that Democrats were evil. It caused me to stop smiling at them. But the littlest girl in the high chair kept smiling at me.

At the stopover in Houston, I witnessed a white man in a cowboy hat help an elderly Asian woman who spoke no English get on the skytram. As he and I were getting off at terminal C, I witnessed him say to the lady "You stay. This is C where I get off. You stay until the next stop which is D. You get off at D. Ok? Do you understand?" The woman gave him a knowing nod and grateful smile.

At the airport, I witnessed a white woman telling a darker-skinned woman wearing a hijab that her top pocket of her backpack was open. The woman wearing the hijab zipped up her pocket and thanked the white women.

On the airplane, I saw a young black man help an elderly white man with his luggage. They both treated each other with respect and exchanged several "Yes sirs" to each other.

In Shreveport, I spoke with a white man who told me a story about his youth. As a lover of music, he was wearing a Jimi Hendrix shirt on when he went to visit his grandma. His grandma threw a fit because his grandson was wearing a shirt with a black man on it. I witnessed this man remembering his story and how he ended up taking that shirt off during the visit, to keep the peace.

That Korean woman was me.

And though I know there is good to see and bad to see, it's when we see firsthand, face-to-face, skin-to-skin, eye-to-eye, that though we may remain philosophically opposed, we can value human rapport and preserve peace.
Posted by Jenny Doh at 6:25 PM No comments: