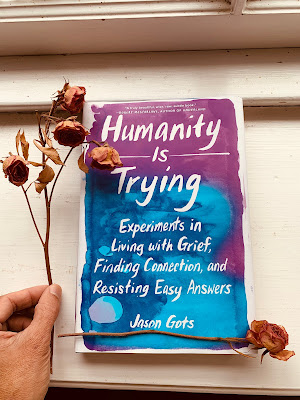 When I first saw this book, I interpreted the title as meaning that in spite of all obstacles, humanity is trying. Trying what? Perhaps to get through to me. Perhaps to let me know that it's ok at times to feel feverishly certain (even with no evidence) and at other times to feel nervously uncertain (even with mounting evidence) as I sit and wonder. The insights that Jason Gots puts forth in this exquisite memoir help me feel simultaneously feverish and nervous about my initial interpretation of the book's title as well as about every damn thing in life. Sometimes nervousness combusts into fury for me when I realize how in the scheme of eternity, 100 years is nothing, making my attraction to skepticism seem cowardly and stupid. Can feverish passion do any real and lasting damage, given that everything is nothing?

In the first part of the book, Gots describes how he was raised in a highly educated family of Explainers, which I understand all too well. A big portion of who I am appreciates the values of sensibility and skepticism upon which Explainers are built, and how those two es words save me from becoming swindled, taken advantage of, or tricked into joining time-sucking and soul-crushing cults.

As Gots introduces readers to the significant people in his life and some of their unfathomable suffering and beauty, I am able to see that even in the context of living as a logic-based Explainer, life is illogical and unexplainable. Why else would we try anything when everything is arguably nothing? Why else would we continue to learn when nothing matters? Why else would we pursue love when love hurts?

And why else would we pursue the creation of art? Says Gots:

"There's something beautiful about our stubborn refusal to stop making these things in spite of their apparent uselessness and inexplicability ... art just IS: one of us makes it and others come along and relate to it, subjectively and idiosyncratically. As such, art is honest because it speaks to what we all are on the inside: strange and inexplicable. Unreliable and beautiful."

In other words, maybe the actual interpretation to the title of this book—Humanity is Trying—isn't about how Humanity is trying to reach me with a message. Rather, maybe the very act of MY trying ... THAT VERY ACT is how humanity gets built.