THE MERITOCRACY TRAP by Daniel Markovits 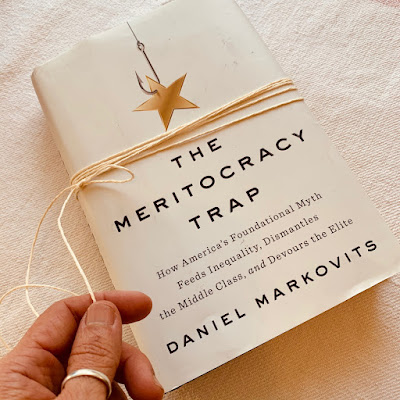 The Meritocracy Trap by Daniel Markovits reveals that the effect of a merit-based system that we think is fair is not fair at all. Not for the affluent elite. Nor for the poor. And increasingly not for the middle class.

It's like this. From the time a baby is born, middle class parents who connect the value of getting that baby into a prestigious college in order for that child to have a shot at a comfortable life motivates the parents to hyper-train and hyper-prepare that baby to get into that college. Which means they first need to get that child into the best kindergarten in order to prepare her for the best elementary and middle schools, which will prepare the adolescent to enter the best high school. Expensive tutors and supplementary prep courses are sought to help the student achieve not only a stellar GPA but demonstrate her well-roundedness. And then there's the training for the SAT. And achievement in sports. And in the arts. And in community leadership. And if all that expensive training still feels iffy, even the super affluent will find a way to hedge their bets. Even fraudulently (e.g., Felicity Huffman and Lori Loughlin).

Assuming the child graduates and lands a job at a prestigious company, there's never-ending pressure to work a crazy amount of hours to get the next promotion. So they can afford to pay for the hyper-training of their own kids.

Ironically, Markovits shows that this type of miserable lifestyle ... of constantly being busy is what signals to the world that the busy human is part of a rising relevant class. In other words, to say "I'm busy working" is viewed as being more prestigious than saying "I'm relaxing" or "I'm thinking" or as Jenny Odell would point out, "I'm doing nothing."

How all this relates to our current polarized national climate is that meritocracy increases the divide between the middle class and the poor. As the middle class is hanging on with exhaustion to earn their way up, the poor are being left behind:

"Meritocracy makes the whites whom it leaves behind into nativists by allowing them literally no place else to go. A white middle-class voter in Indiana, reflecting on Donal Trump's appeal recently explained that "the whole idea" of white privilege irritates whites outside the elite "because they've never experienced it on a level that they understand. You hear privilege and you think money and opportunity and they don't have it." The meritocratic suggestion that a white man who cannot get ahead must be in some way deficient stokes this anger ... Furthermore, meritocracy naturally produces not just nativism but also populism --a deep and pervasive mistrust of expertise and institutions."

Populism is what led to Trump. It is also what could lead to an extremist "progressive" version of Trump.

THE CHRONOLOGY OF WATER by Lidia Yuknavitch 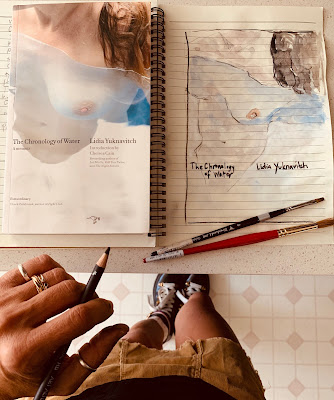 In the beginning, I feel the book (The Chronology of Water by Lidia Yuknavich) is going to corroborate my general argument that life is a bowl of shit and hurt. From birthing a stillborn baby daughter to dealing with hardly a father, Yuknavich pulls me in super close to examine all the shit, all the hurt.

The irony is that the extraordinary way she writes makes even the most awful thing she recounts to be recounted with alarming beauty. The kind that gets me all jealous because I want MY writing to be that beautiful. I want my recounting to be as raw and unfiltered. I wonder, WHEN will that happen to MY writing? Or rather, WHY hasn't that yet happened to my writing? What will it take?!

She doesn't make fake postures or leave out the embarrassments. Like when she was arrested for a DUI and had to (as part of her punishment) become part of a road crew to pick up trash, lift heavy stuff, clean toilets, and other things that I don't associate with what a professor of writing does: "... by day I was out there with my posse while at night I had a fancy visiting writer job teaching budding young MFAS how to make their words more wonderful ... " (page 233).

Reminds me of brilliant standup comedian Jessica Kirson who in an interview explains the work she has done for a project with Robert DeNiro. Rather than stay puffy about that experience and then fake posture about living the life on easy street, she says that one day it's DeNiro, the next day, it's getting booked at a smelly hole in the wall to be heckled by an asshole.

Toward the end of the book, Yuknavich answers the question of what creative writing graduate students should be reading by saying: "Everything. They should read everything they can get their hands on. What they love, what they hate, all of it. You wouldn't jump into an empty pool, would you? Literature is the medium. You have to swim in it" (page 240).

And to do so by not calling oneself brave but to recognize that embedded in between all the hurt are moments of thrill, joy, love, and (as Victor Frankel would say) extreme fulfillment. 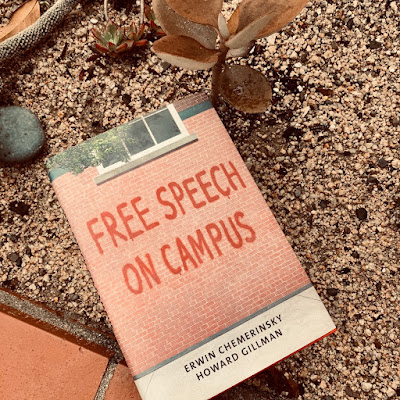 The fact that this book is compact and can be read quickly doesn't mean that its content is easy to digest. I think it is a must-read not only for students, staff, and faculty on college campuses but all humans engaged with the exchange of ideas.

Catharine MacKinnon, one of my favorite feminist legal scholars and thinkers, is cited two times in the book. The first citation (page 85) is about her argument to prohibit pornography because of the harm the industry commits against women. In my reading of MacKinnon's work, the harm is not only in the products that the industry produces, but also the process of the industry, where women are typically treated as subordinates to men.

Chemerinsky & Gillman recognize that concepts of removing harm and building protections are high priorities in the minds of modern college students. These students' relationship with the First Amendment isn't necessarily informed by lived historical moments of how and why free speech has protected vulnerable communities. Rather, it's informed by seeing that under the guise of free speech, hate speech and bullying can run rampant, thereby upsetting, triggering, and as Mackinnon would argue, harming them. Which is why it's becoming a popular tendency for students to cancel, cleanse, and silence those who they deem as upsetting.

In the second citation of MacKinnon (page 118), there is an important distinction made between speech and sexual harassment. We learn that under Title VII of the 1964 Civil Rights Act, harassment is not protected speech. Chemerinsky and Gillman assert that the first type of harassment as defined by quid pro quo is a no-brainer and should not be protected. However, the second type as defined by a "hostile work environment" is less clear cut.

I believe the reason it's less clear cut is because people receive words, glances, hugs, and all other forms of communication differently. In the art world, a nude painting of a woman can be viewed by some feminists as propagating the male gaze; a term (coined by Laura Mulvey) that argues that women are frequently depicted as passive objects in order to please the male active subjects. However, other feminists can view the same nude painting (and some types of pornography (both product and process)) as liberating and desirable.

The fact that MacKinnon is one of my favorite scholars AND that I don't agree with every single line of her legal arguments doesn't mean that I need to cancel or silence her. That her radical point of view has helped establish Title VII to push us into deeper thinking about what constitutes speech and what constitutes harassment is a good thing.