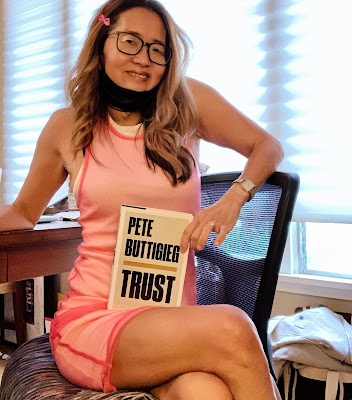 TRUST
"Laakum diinukum wa lii diinii" is the Arabic sentence that came out of Pete Buttigieg's mouth in a tense moment when he and another American found themselves in a marketplace, on the streets of Somalia (TRUST, Buttigieg, 2020). The tension began when rather than pretend that he and his friend were Canadians (which many Americans were doing while in the Middle East (in order to avoid receiving the negative attitudes toward Americans)) they declared to the people in the marketplace that they were from the USA. As tensions about politics and religion rose in that moment, Buttigieg (a devout Episcopalian) uttered that sentence which translates in English to: "Your religion for you, and my religion for me." Buttigieg explains that it is "the final sentence of a sura in the Quran about how Muslims are supposed to speak to unbelievers."

BIOREGIONALISM
After a string of blisteringly hot days, I see clouds rolling in as I look out the window from where I write. Much-needed rain will come. An isolationist would want me to believe that the rain that falls on me is MY rain, produced by MY land. America first. To hell with everyone else.

But science teaches that rain happens through a phenomenon called bioregionalism, where atmospheric rivers transport moisture from the tropics to other parts of the world, and that 30-50 percent of California's rain comes through "atmospheric rivers" that originate in places like The Philippines (How to Do Nothing, Odell, 2019).

CLIMATE CHANGE
Yesterday I attended a zoom conference held by The Hammer Museum where speakers were talking about the troubling lack of storytellers telling stories about climate change. One reason is that storytellers can more easily tell stories by looking at something that has happened in the past. Wars. Famines. Disasters. Climate change isn't something that happened in the past. It is happening.

To take action and care not only for what is mine or what I think is mine (e.g., God, rain, etc.) we need to find a way to strengthen trust in experts and institutions who provide not conspiracies based on innuendo and mistrust, but evidence through research, study and good faith. As addiction to conspiracies and misinformation continue to spread, it feels daunting. It feels like a tug of war between isolationism and global cooperation. Between forced faith and faux faith. As much as it feels tempting to give up and let go of that rope, I hold on, and meditate on the final sentence in this book where Buttigieg says: "I trust that we can meet that moment, if only because we must."

THE ABUNDANCE by Annie Dillard 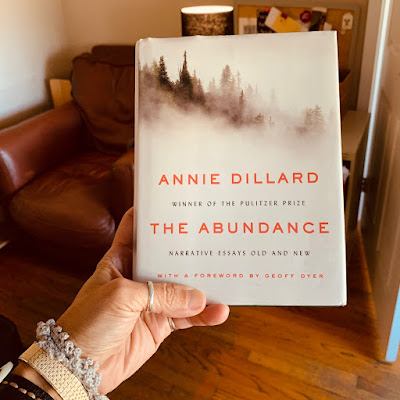 As I was reading Maggie Nelson, I knew that I'd be reading Annie Dillard. Because when a writer I admire admires another writer, I jump to that named writer. The massive pile of books by assorted authors that has been waiting to be read will need to wait longer. I've got time, I think.

Within her book of essays titled THE ABUNDANCE, there is an essay titled The Deer at Providencia. In it, Dillard talks about a newspaper article titled "Man Burned for Second Time" that she has clipped and keeps taped to her mirror. It's about a man named Alan McDonald who as a young person was badly burned in an accident involving flaming gasoline. Dillard explains that severe burn victims have a high suicide rate: "Medicine cannot ease their pain; drugs just leak away, soaking the sheets, because there is no skin to hold them in." The article explains that years after this first burn accident, McDonald is involved in a second accident, causing him to be severely burned a second time. The article quotes McDonald as saying "Why does God hate me?"

I can barely read beyond this essay because I actually start sobbing for McDonald and all other burn victims of the world. And I want him to know that I hear the validity of his question.

In the following essays, Dillard challenges me to wonder HOW I see by arguing that likely, I see what I expect. She cites author Stewart Edward White who writes about the way of seeing deer: "As soon as you can forget the naturally obvious and construct an artificial obvious, then you will see deer. " In other words, I am one who walks with a camera (from shot to shot) or without one, to allow an internal shutter to open as I see a new way, allowing me to become a true observer.

Dillard takes me with her on her own journey of sometimes seeing the mirage of immortality that gets constructed in between nature's harsh evidence that life is finite. And if I can see the mirage for what it is, I will take her advice when she says: "SPEND the afternoon. You can't take it with you."

If I had that newspaper clipping about McDonald, maybe I'd read that. Or the cards my kids have written me over the years. Or nothing at all. And ask indignantly (mainly because I don't know whether I truly hate death), "Why does God hate us?"