How to Lose and Find Your Sh*t 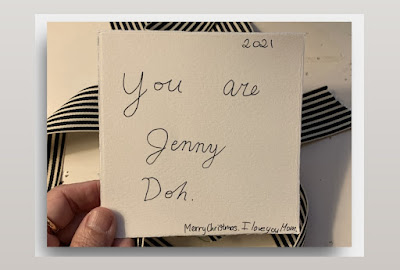 Forty eight hours before I receive this card, I start to lose my shit. It's 2AM, December 24th and I take Gerardo back to the ER. Again. It's been less than a week since his last hospitalization, where his stabilization outpaces UCLA's bed availability, resulting in a discharge where we are back at home, with commutes to UCLA medical appointments on calendar and on the horizon for 2022.

By 6PM, Gerardo is finally in a bed and I along with all other hospital visitors are kicked out and I decide to not return home but to check myself into a Hilton. I need to enter a room where nothing about it is medical. And before I do, I need to find a table for one where I can order an entree from a menu that I eat while being seated the whole time. And after the meal, I need to dive into a bed with crisp sheets and before I fall asleep, to allow myself to break apart into tiny pieces as I sob into a pillow. I don't shower. I fall asleep in the same clothes. 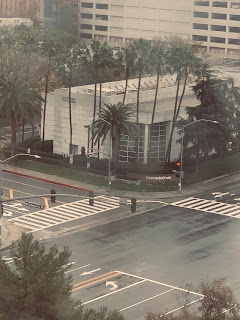 I text with friends to express my anger about everything. I hate everything and everyone and most of all I need the pressure of Christmas to be over.

I wake up and go to my local Starbucks on Main Street where the manager and baristas know me and my family's situation and have been nothing but classy and comforting to me. As I approach the counter to order my usual (Hot Venti Americano with cream on the side), my favorite barista is two steps ahead of me because he's seen me from afar and likely surmised that I've had a rough night. He has already made me my usual and comes to give it to me in the middle of the line and says it's on the house. The Americano gets mixed with tears that I chug down. Salty good. 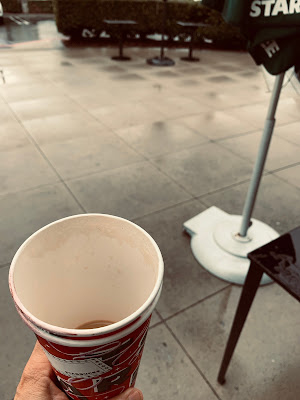 Gerardo is discharged that night. Christmas is almost over, thank God. And as we carefully walk up the two stairs to enter the house, I am reminded that I need to contact John, our handy guy, to build us a ramp so Gerardo doesn't have to climb up and down the two steps every time. Two steps don't sound like much until they become much. I see the holiday wreath that my talented friend Dori has made and quietly hung on my door, along with black and cream ribbon that I had admired on her neck some weeks ago left for me with a note of friendship.

Sleep happens. Wake happens. I start tidying the house, and see this card atop a gift bag that I can tell Monica will be giving me later in the day. I weep again, not because I feel myself breaking apart but because I feel myself gathering my parts back together. And I say to myself what Mr. Bergstrom has reminded Lisa Simpson to do in times of need, which is to remember who I am. I shower, tie the ribbon around my neck and get to the business of getting our family to exchange the love. 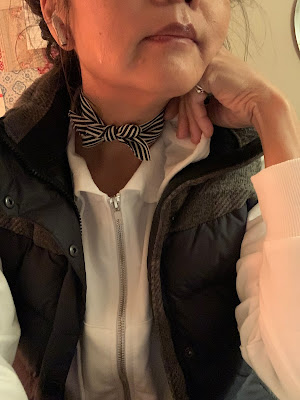 Paying Attention to Someone IS Love 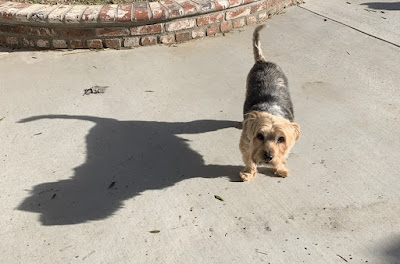 After reading my last post about Gerardo's hospitalization, one of my friends wrote this to me:
The word "gaze" will always mean so much more to me. I have a reminder posted above my desk from a quote I read a while back. "Paying attention to someone is love." I find that paying attention to my grandkids is what they want most. Their simple delight when they see we are watching feels like love back. The way you, Monica and Andrew and the staff intently paid attention was the love Gerardo needed to hang in there against very tough odds. Gerardo circled love back with his gaze and yet conserved his needed energy. I look forward to hearing what the days ahead bring. There are so many of us hoping for a transplant soon.
Love,
Crisynda
Attention IS love. It is also currency. It is the most valuable resource that I possess in this attention-driven economy where through the addictive tools of technology, my attention is pulled in directions that I don't even realize exist, all clamoring for my clicks, likes, and dollars. Crisynda reminds me that attention outside the economic realm has the power to make a person feel loved and seen, more than any purchased material.
This point is one that I have been making to my students for the past four years teaching at UC Irvine, with the help of Jenny Odell's book, How to Do Nothing.
I am fortunate to have a life where I don't teach more than one class at a time, and that my class size is small, usually no more than 40 students at a time. This allows me the capacity to give tailored feedback on the papers that I ask students to write on a weekly basis. It allows me to meet with students individually outside of class. It allows me to be completely present during lectures and to give each student concentrated attention. Students have said to me that they are not used to the attention. They are used to larger class sizes and instructors with good intentions spread so thinly that usually, the final grade is the only feedback that they get.
When I used to be a social worker for child protective services, my caseload was through the roof, which has been and continues to be the case for the profession famous for the burn-out factor. For most social workers, there is hardly any time to give proper attention to the children who are supposed to be shepherded because they are expected to shepherd so many.
When I used to be editor-in-chief within the magazine publishing industry, my workload was also through the roof with never enough time to give proper attention to any single magazine because there were so many to produce.
Regardless of the profession, it seems that people in charge try to invent new interventions to improve systems. Whether it's teaching, social work, publishing, or the work of being a human, I think the intervention that is most effective is when we can organize ourselves so that we are not spread so thinly.
Because isn't the intervention that really makes sense a smaller class size? A smaller caseload? Fewer magazines? Less hustle? Less pretending?
Isn't the work of being human found not in the shallow glance of the clamor but the deep gaze of the calm? Isn't that love? 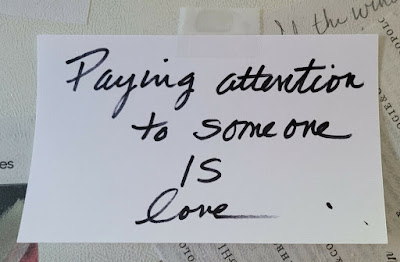 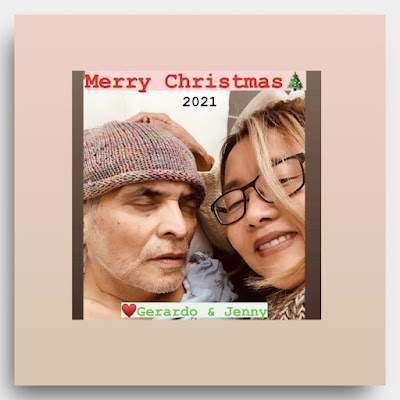 It's been five months since Gerardo was accepted into UCLA's liver transplant program and I write this post as an update to my original post.
Gerardo and I have spent most of December at the UCI hospital. Though his MELD score doesn't seem to rise above 21 (the same score that he entered the program with in July), other troubles hover over us. During this hospitalization, he experienced a sudden and harrowing episode of acute cognitive failure related to advanced hepatic encephalopathy. Gerardo's brain was straddling this world and a world beyond this one. It was exhausting for me to watch and exhausting for Gerardo to experience. As he was mostly in another world, I sat bedside during visiting hours talking to him about the past, present and future in order to try and cajole him back to this world. When I recalled the day when Monica was born and the day when Andrew was born, Gerardo's face lit up. There were moments when he was able to hold my gaze for a few seconds and at the end of visiting hours when I tried to say goodbye, he would say "Jenny, wait!" It was the same when either Monica or Andrew visited. He held their gaze and when either of them got ready to leave, he non-verbally expressed a deep longing for them to stay. It was heartbreaking and heartwarming at the same time.
During one of the more desperate bedside moments, I was crying uncontrollably as I asked Gerardo for a favor: "Gerardo, I am asking you to do just one favor for me. You have to hang onto any little kernel of cognition that your brain can latch onto and you have to build upon that kernel and come back. You have to come back."
Yesterday, after days of cognitive failure and assorted interventions by teams of medical experts, he was given a sleep aid, causing him to sleep for a solid four hours. As he was waking, Gerardo started to engage and converse. It was mostly in Spanish (his first language), laced with songs, peppered with English and fueled with emotion. The attending nurses and I literally jumped for joy as we witnessed Gerardo coming back to this world. The Comeback Kid. When I asked Gerardo whether he remembers any of my words or the words of Monica and Andrew during the time when his brain was leaving us, he said "I remember everything. I remember the favor you asked of me."
As of this writing, UCI Medical Center is working to facilitate a transfer of Gerardo from UCI to UCLA so that the liver transplant specialists at UCLA can potentially broaden the scope of care for Gerardo. It may take a few days before a bed opens up. The thing that could change everything with this plan is if Gerardo stabilizes enough to be discharged back home before a bed opens up at UCLA. A hospital-to hospital transfer doesn't correlate to prioritization of being matched with an organ but the idea of being in closer proximity to the team that conducts transplants feels hopeful.
When I texted this update to Mike (my friend from junior high & high school) who lives in LA, his response was simple and immediate: "I have a bed ready for you." Reading those words of solid friendship made me shed some beautiful tears. There are other gestures of warmth and love and support and caring from my friends that make me feel gratitude, even in the context of uncertainty.
So for the rest of December I may be visiting Gerardo at UCLA and either taking up Mike's offer to use his extra bed, or checking into a room at Luskin Center on campus. Or I may be continuing to commute with Gerardo to UCLA appointments from our home. I wonder with hope what kind of update I'll be writing in The New Year.
For now, please accept a heartfelt Merry Christmas on behalf of Gerardo and me as we wish for you the opportunity to hold beautiful gazes, and to feel deeply, the presence of loved ones.
Love,
Jenny
PS: The gratitude I feel for all of the doctors and nurses I've met throughout this journey is higher than the highest mountain. I am grateful that these individuals applied their God-given talent to complete medical school or nursing school, studied hard, worked hard, and that every day, they choose to dispense complicated medical interventions while maximizing patient dignity as their day-to-day work.
Posted by Jenny Doh at 8:02 PM 8 comments: