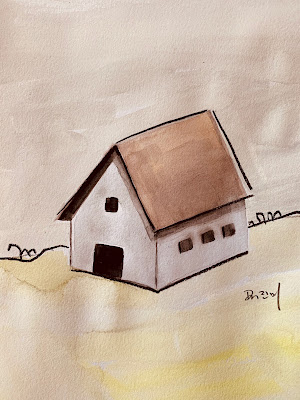 MUDSILL
I just learned that the wood beam that gets secured along the foundation of a house is called a mudsill. Onto this mudsill is where additional beams get attached, allowing the entire framework and eventually the entire house to be constructed. Isabel Wilkerson provides this information in her essay (America's Enduring Caste System, NYTimes Magazine, July 1, 2020) to help us understand structural/systemic racism.

CASTE IS
She reviews the traditions of India and its caste system and points out that it is one where people are born and ushered into a hierarchy where their destinies are predetermined by social status and perceived inherited purity. Why the caste system has endured is largely due to the religious/cultural belief that the only way to eventually move up via reincarnation is to adhere to the place in the caste that a person finds herself currently in. In order to one day do jobs other than clean and serve, a person on the lower level of a caste is taught that only by not resisting her lot in life will she eventually move up the system in a future life to perhaps do things other than clean and serve.

Says Wilkerson: "Race, in the United States, is the visible agent of the unseen force of caste. Caste is the bones, race the skin." And because bones live under the skin, the structure of oppression isn't necessarily visible. Rather, it's understood, assumed, and breathed. Caste is.

THE BUSINESSMAN
Wilkerson shares a story about how years ago, she was on assignment as a reporter for The New York Times to do a Chicago-based story. She arrived early to interview a successful Chicago businessman that she had planned to feature in the story. Once the businessman arrived, he refused to believe that Wilkerson, a black woman, was the reporter. No matter how much she explained that she was, he refused. So Wilkerson left without an interview.

RUNGS & ROOTS
To live in the United States caste system means that black people are viewed to exist at the lowest rung and white people at the highest. Asians, Latinos, and other people who aren't black and who aren't white straddle in-between rungs with unease, "as they aspire to a higher rung."

Wilkerson explains that she never named or shamed the businessman from Chicago "because of our cultural tendency to believe that if we just identify the presumed-to-be offending outlier, we will have rooted out the problem. The problem could have happened anyplace, because the problem is, in fact at the root."

In other words, the caste is built into the structure, the mudsill. And like roots, the mudsill isn't visible. It is foundational.

WOW, NO THANK YOU by SAMANTHA IRBY 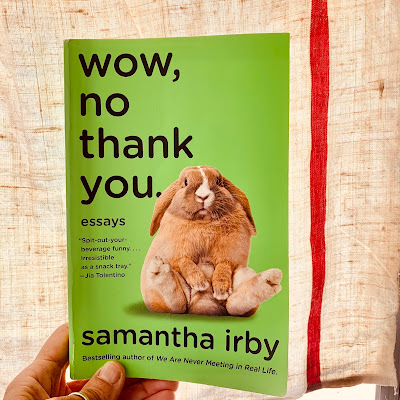 Thank you to Jia Tolentino who tweeted out her love of WOW, NO THANK YOU by Samantha Irby. Given that I loved reading TRICK MIRROR by Tolentino, I promptly bought Irby's book without knowing what was in store within the pages. For me, if the source is credible, I sign onto that source's recommendations, sight unseen.

The tone of WOW, NO THANK YOU is set by the one-sentence dedication on her dedication page, before the TOC, and before the 18 essays about nothing in particular and every little thing in specific. Says Irby:


This book is dedicated to Wellbutrin

Transparency and honesty are things we love to say we love about writers. What I've observed is that authors who claim they are honest and transparent and vulnerable (yada yada yada) are usually hiding something. It's authors like Irby who doesn't say any of that and instead writes about the time she went on a speed dating event with a diaper on and pooped a little in it during the event. It's not just about a little bit of poop, though. It's about feeling mortified at every turn in terms of dating, writing, friending, sexing, eating, drinking, and plain old getting out of bed and not ending it all, to live another day.

Now that I've finished this book, I think I'll go back and read everything else Irby has ever written. I wanna say it's because I like reading vulnerable and transparent writing. But instead of saying that, I think I'll just read more unaffected writers like Irby.
Posted by Jenny Doh at 3:57 PM No comments: