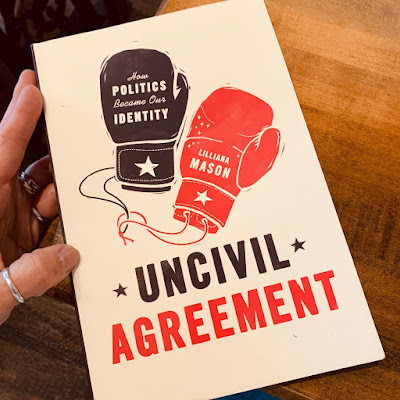 Of all the research studies that Lilliana Mason sites in Uncivil Agreement, there are two that astound me.

THE FIRST is by Muzafer Sherif (1954) where he recruited 22 fifth-grade boys with very similar backgrounds. They were divided into two teams (with neither team knowing of the other team's existence) and asked to come up with a team name. One group came up with EAGLES and the other came up with RATTLERS. In the second week when the boys were told of the other group's existence, the boys started to characterize the outgroup with derogatory names, eventually escalating into all-out combat, fighting, and bad-faith accusations.

THE SECOND is by Henri Tajfel (late 1960s) where he recruited subjects who were asked to estimate a number of dots on a screen. After a subject gave an estimation, the researcher randomly assigned the subject as being either an overestimator or an underestimator. In the next phase, each subject was given the opportunity to allocate money. Option A allowed subjects to give everyone the same amount, say 10 dollars. Option B allowed subjects to give his/her own group a little bit less (like 9 dollars) and the "other" group even less than that (like 8 dollars). Tajfel assumed everyone would choose Option A, where everyone benefits equally. Surprisingly, Tajfel found that subjects preferred Option B, where they opted to privilege their own ingroup over the outgroup, even if it meant that their own group received a little less, as long as the other group became less victorious than them.

Mason also presents a rich historical review that shows how our identification with our respective parties have become hyper-identifications. The hyper part has to do with how a political party not only reflects our public policy preferences but also our experiences as they relate to sex, class, race, age, and more. Mason points out that our self esteem strongly correlates to whether a person's hyper-identity (as represented by D or R) is winning or losing. In fact, winning has become more important for most of our citizenry than the nuts and bolts of a particular policy. In other words, even if the policy that wins gives a person fewer dollars, that person is likely ok with that, if it means that the "others" on the opposing team get even fewer.  Winning and becoming privileged is more desired than strengthening common good. Identity politics doesn't affect just the progressives. Identity politics is the foundation upon what Trump has created:

"While many conservatives lament his lack of consistently conservative policy positions, he remains remarkably popular with the base of the Republican Party to date, and this encourages establishment Republicans to fall in line behind him. This popularity does not come from his policy-based bona fides but from his use of the power of simple identity to rile up a significant position of the American population (127)."

Mason points out that once upon a time, we used to say that we shouldn't talk about politics and religion at the dinner table lest conflicts arise at that table. But now, she points out there's less of a problem talking about politics and religion at the table because more and more, we are surrounding ourselves with people from our own hyper-identities who have no distinctions or disagreements. In other words, we are creating isolated pods where we surround ourselves either with Eagles or Rattlers and therefore have no other point of view enriching or challenging our ideas.

Interestingly, when I've brought up this book to my friends and specifically pointed to the two experiments by Sherif and Tajfel, most of my friends have all been aghast at how "those subjects" could be so terrible and how they would never behave like that. When we learn about disturbing human tendencies, one popular way to cope is to signal that we are above all of "those other" humans, thus creating a weird ingroup/outgroup dynamic without even realizing that it's happening.
Posted by Jenny Doh at 2:12 PM