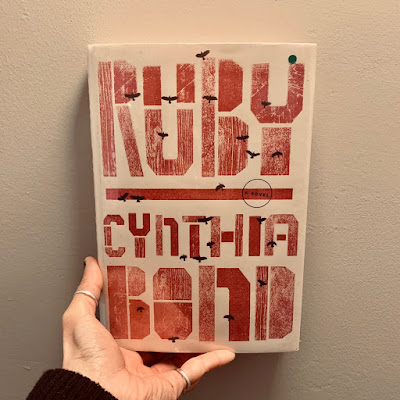 It was James Taylor who explained in an interview (with Marc Maron, I recall) that there are maybe five or six subjects that songwriters write about. And that he's been writing those five to six stories throughout his career, again and again, from slightly different angles.

I think that's right. Not only in songs but also in literature. Let's see. What would those five to six stories be about?
1 Love/lust
2 Yearning/unrequited love
3 Betrayal
4 Abuse
5 Death
6 Despite 1-5, it'll be ok (or it won't) and things will go on

I'd say the book RUBY by Cynthia Bond covers it all. Ruby is the beautiful, innocent girl who is so violently abused from childhood into adulthood that she checks out of reality in order to survive. This checking out is characterized by the cruel gossips in her community as mental illness.

The different angle that Bond uses to tell this story involves magical realism where characters in the now wrestle for survival, from Dybou, a force of pure evil. No, Evil. With a capital E.

A unique detail that Bond also uses to tell the story is the angel food cake that Ephram's sister bakes and Ephram uses to retain his resolve to declare his love for Ruby. It's just a cake but it's a symbol that demonstrates that regardless of how deep the hurt, how unjust the betrayals, we can put all that in the "it doesn't matter" column and pursue the column of redemption. No, Redemption. With a capital R. For Ruby.