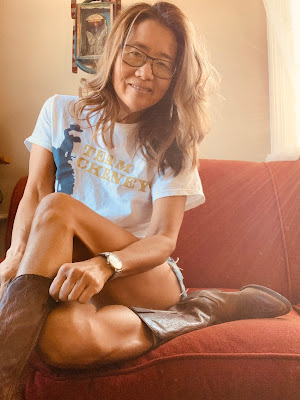 Some of the extreme woke of my party have been shooting arrows at Ds who have expressed gratitude and admiration about Liz Cheney's ability to withstand critics from her own R party and continue participating in the special committee to investigate facts about the lawlessness that occurred on January 6th. The narrative of the arrows of the extreme woke goes something like: "How can any self-respecting D support Cheney when she doesn't support Biden's infrastructure bill? Her opposition to the bill shows that she's not TRULY a good person."

Cheney caught hell not just from the woke of my party but the extreme trumpists of her party for having given a fist bump (which is a playful variation to the handshake) to Biden in August of 2021 as he was walking toward the House dais to deliver a speech. The narrative of this criticism from all the extremists goes something like: "How can you greet and smile at our enemy?"

Such narratives remind me of the arrows that the woke of my party relentlessly shot at Pete Buttigieg for his agreeing to appear on Fox News to explain his platform during the 2020 primaries, suggesting that Buttigieg was a bad person for allowing himself to "engage with the enemy."

These narratives also remind me of a passage from On Freedom by Maggie Nelson as follows:

"... it's naive and unfair to expect artists and writers to have special access to the most intense, extreme, or painful aspects of life, then to act surprised and appalled when they turn out to have a relationship to those things that exceeds that of abstract contemplation or simple critique. Thankfully, acting as if the world neatly divides (or that our task is to divide it) into problematic, ethically turbulent, essentially dangerous people who should stay "over there," and nonproblematic, ethically good, essentially safe people who should be allowed to stay "over here," is not our only option. After all, what I've just described is a prison (On Freedom, page 60)."

In America, is it possible for a D to vehemently stand in opposition of the policies of a Cheney and still be able to give her a fist bump?

In America, is it possible for an R to vehemently stand in opposition of the policies of a Biden and still be able to give him a fist bump?

In America, can we hold differing approaches to betterment while agreeing about following the rules of the democratic process that govern the way we disagree?

In other words, are Americans capable of throwing policy hardballs AND being good sports?

Sadly, I feel that every day, I see my answer to all those questions moving closer to a no than a yes.

Perhaps America is devolving into a neatly divided prison-state by fueling extreme wokeism and extreme trumpism ... two sides of the same dreadful coin.