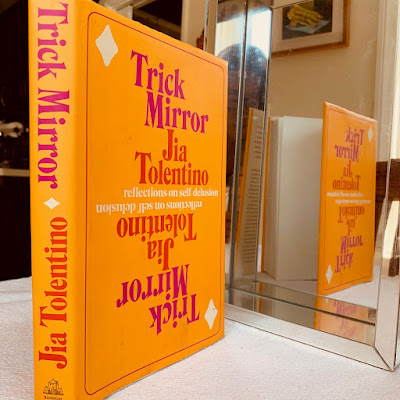 There are a total of nine essays contained in this book titled Trick Mirror by Jia Tolentino. There are details that make each essay unique and in the end, they weave a reading/thinking experience that makes me ponder the following questions:


I think the best essay is her sixth one, where Tolentino reviews modern day scams. Scams led by icons like Billy McFarland, and Elizabeth Holmes and others led by more abstract entities like Wall Street (and the 2008 housing market crash), and Amazon (as in lickity split we will get that order to you by tomorrow even if we destroy small businesses and force workers to pee in a bottle in the process, dot com). The essay points to none other than the 45th President of the United States as the ultimate scammer. A narcissist who wants to exist only at the top because he sees no value in being anywhere else. A grifter (not unlike McFarland and Holmes) who is so consumed by how he APPEARS TO BE rather than WHO HE IS that he is willing to let everyone and everything unravel, as long as he remains where he wants to be.

Tolentino precisely connects what happens to humans, especially young humans, who exist in a world of uncertainty, straddling debt and temporary side hustles: "Into this realm of uncertainty has come a new idea—that the path to stability might be a personal brand."

"Branding" never sleeps. And neither do people who talk about it and call themselves "THE REAL (insert name)" and address their audience with "You guys!" with periodic teasers like "I have BIG news to announce tomorrow!" And without sleep, you could start doing weird shit. Like selling tickets to a festival without having a clue how to coordinate it. Or claiming to have created a new invention that can (with just a drop of blood) test for all sorts of diseases, without having invented it. Or promising to build a wall financed by Mexico knowing full well that Mexico will do no such thing.

It feels like the whole world is sleep-deprived. Why else do thousands of people actually buy tickets (that they can't afford) to a scam festival? Why else does a circle of educated elite invest hundreds of thousands of dollars in a fake blood testing machine? Why else do millions of folk vote for a grifter who previously led a string of scams including the defunct Trump University, where a victim of the scam (cited by Tolentino) says "I believe that Trump University was a fraudulent scheme, and that it preyed upon the elderly and uneducated to separate them from their money"?

Perhaps it's sleep. Or something else. But our depravation of it is destroying us.
Posted by Jenny Doh at 4:54 PM