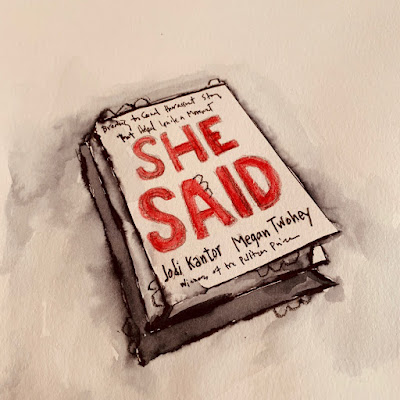 In reading this book, there were moments when I found myself saying: "Go to print already! What are you waiting for?"

As I read the entire book, I found myself grateful that Kantor and Twohey (and their team at NYT) had the journalistic discipline to wait. To check and double-check their facts and sources in order to ultimately present a bulletproof account of Harvey Weinstein and his mistreatment of women. This story also opened my eyes to the structures of the judicial system (with its ability to buy silence through settlements) and the culture of Hollywood that allowed the horrors to play out.

The authors make an important point about the "Believe Women" hashtag that has become popular in this post-Weinstein age. Regardless of good intent, there's a difference between helping stories be told, and a blanketed believing of every woman and a blanketed not believing of every man. The truth is in the details. And waiting for those details to surface can be an arduous journey.

The details outlining the monstrous ways in which self-proclaimed feminist lawyer Lisa Bloom used her knowledge to aid Weinstein in further destroying women for financial gain is an example of why blind faith in all women is misguided.

There's a current collective backlash happening where people are pushing back against "cancel culture." I get it. Touching a shoulder isn't the same as an attempted rape. Aside from such distinctions, what's most important I think is our ability as humans to evolve and mature. Do I have the capacity to look back and truly feel sorry and embarrassed for stupid past behavior? Do I have the strength to acknowledge that today, make reparations, and behave better?

I suppose that is what is at the core of evolution and justice—our ability to expose it and own it, versus our instincts to hide it and deny it. And even worse, to perpetuate and profit from it.