ON TYRANNY by Timothy Snyder 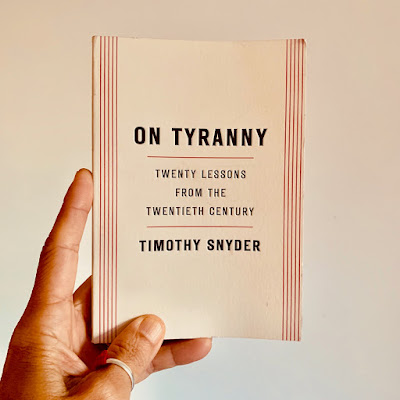 Each of the 20 lessons contained in Timothy Snyder's remarkable little book titled On Tyranny wakes me up to the urgency of being awake, even though under the current administration, it is tempting to not be.

The lessons are about how to detect and resist tyrannical tendencies associated with corrupted power. One of the overarching themes from the lessons is the importance of leading a three-dimensional life rather than a two-dimensional one. To avail ourselves to real conversations where we make eye-contact with real humans rather than melding into our chairs and letting the screen feed narratives into our psyches, tricking us into thinking that we've had conversations with people when we haven't had them at all.

Three-dimensional living is similar to the concept of not allowing our bodies to disappear, as explained in How to Do Nothing by Jenny Odell, where she examines how the modern world pressures bodies to dissolve so that only hours for productivity remain. Hours flatly detached from bodies that have potential value as long as the hours can be commodified.

Lesson 9 is about language:
"Avoid pronouncing the phrases everyone else does. Think up your own way of speaking, even if only to convey that thing you think everyone is saying. Make an effort to separate yourself from the internet. Read books."

Being sloppy with language has a way of pulling us away from three-dimensional living. Where everyone repeats cliches, where nothing stands out because everything is a spectacle, and everyone is reading characters rather than lengthy articles. Where the uniqueness of each voice disappears, along with paper ballots, wristwatches, snail mail, and walks taken without the aid of walking-apps.