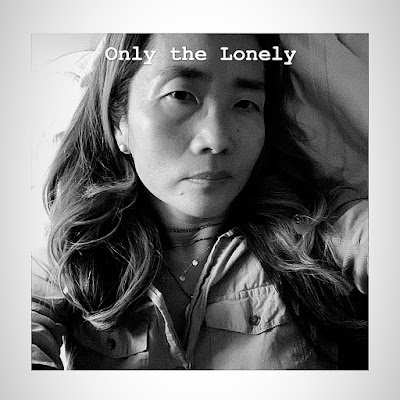 Whenever I'm setting up my art studio (on the upper level of my building) for an event, there are humans who offer to get me a coffee from the downstairs café. Though I would gain convenience by saying yes, I always decline. I prefer to get my own coffee. Mainly because I enjoy the interaction with the barista. Depending on the coffee house, the barista, and my mood, the interaction can be just about the coffee or also about the weather, and occasionally about a book I'm reading, if I happen to be holding a book while I'm ordering.

This type of interaction with the barista helps me feel less lonely. Or maybe a better way to say it is that it helps me sustain a peace with my solitude (the enjoyment of being alone) which I cherish. Same thing with the cashier at the grocery store, the lady who opens up a dressing room at Nordstrom, and the guy at the bookstore information desk who researches a book for me.

And sometimes, the kind of small talk that I have with these strangers is all I need to combat my loneliness ... which is when occasionally and unexplainably, my solitude feels too intense.

There have been times when I've made the mistake of reaching out to acquaintances from my contacts because I feel lonely. Only to find myself in the company of an acquaintance whose company is worse than my loneliness. Misery.

It's taken me decades to realize the formula that works best for me: regular small talk with strangers and occasional dates with humans I enjoy, with a firm commitment to avoid availing myself to people with whom I feel miserable.

In his book titled On Tyranny, Timothy Snyder points out the importance of making eye contact and small talk with strangers when living under a government with tyrannical tendencies. He cites historical moments in history when people living in fear of fascist regimes regarded a smile, a handshake and a word of greeting with positive significance. It is when strangers looked away or crossed the street to avoid contact that fear among its citizenry grew.

Vivek Murthy (US surgeon general from 2014 to 2017) found that the topic that dominated his time when speaking with Americans in terms of overall health wasn't disease. It was loneliness. Christopher Wylie, the guy who blew the whistle while working for Cambridge Analytica presents in his book titled MINDF*CK that the the reason cyber entities like Cambridge Analytica is able to feed fake news into the psyches of humans is because more and more, humans are becoming isolated, where instead of talking to real people, we peer endlessly into our screens. And when you're isolated, you're lonely. And when you're lonely, you let misery in.

I wrote this piece this weekend when I started to feel my solitude transition into loneliness. Thankfully, I resisted miserable company. Gratefully, I have a lunch date with a human I love coming up in a couple of days. And in the meantime, I've enjoyed making the rounds to my coffee shop, my bookstore, my gym, and my grocery store, exchanging smiles and making glorious small talk with complete strangers.