THE ART OF CRUELTY by Maggie Nelson 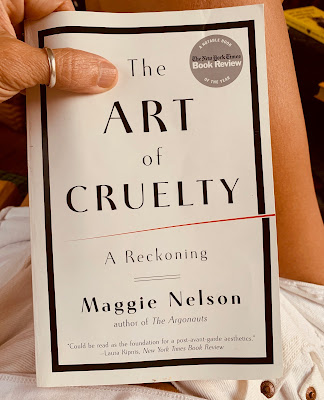 The seventh chapter of THE ART OF CRUELTY by Maggie Nelson is titled The Golden Rule. In it, Nelson cites American composer and philosopher John Cage (1912-1992) as follows:

In other words, who is anybody to say that everybody should be treated or behave a certain way based on anybody's preferences? At the grocery store, the water cooler at the office, in front of the television, or at a theater. And of course, in bed. What is the Golden Rule in bed? Slow and gentle? Or rough and tumble?

Earlier in the book, Nelson cites Yoko Ono's performance art from 1964 titled Cut Piece where Ono sits on a stage with a pair of scissors placed next to her, with permission given to the audience to cut her clothing if they want to. Most don't want to. But some do. Nelson describes how after several nervous minutes of silence laced with giggles, a young man comes forth and cuts her bra straps, thus exposing her breasts.

Maybe a reality show. Like Survivor Island. Is it cruel to watch grown adults suffer from dehydration or gag from eating gross things? And what about American Idol auditions, asks Nelson. Is it cruel for us to watch bad singers get humiliated?

How do we reconcile the paradoxes within the human heart? We love to tout the Ellen DeGeneres "be kind" narrative while simultaneously proving (through not only the classic Milgrim Experiment (1963) but subsequent experiments designed in like fashion over the years; as well as contradictions of workplaces like the DeGeneres studio) that perfectly average people choose (and perhaps enjoy) cruelty. Is reconciliation impossible because we are mysteriously and unpredictably both kind and cruel?

GENTLE CAUTION: This book of art criticism cites many other works of art containing sexual violence. Though brilliant, it is not for everyone. Read it if YOU want to (or think you want to).