The Tragedy of Imitation 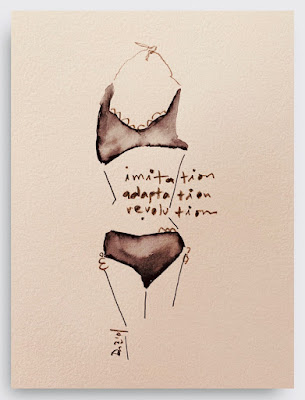 AVANT-GARDE
Elaine deKooning made a keen observation about the twentieth-century American abstract expressionist movement that she herself was part of. A movement where artists living in New York were experimenting, taking risks, and pursuing an avant-garde existence in the way they painted, the way they lived.
The observation as cited in NINTH STREET WOMEN by Mary Gabriel is as follows:

"And to those who clung to the notion that only pure abstraction could be avant-garde, Elaine pointed to the legions of imitators who had mastered the style and in so doing reduced the artists' abstract revolution to mere convention ... True art, she said, is that which reflects an individual creator in a particular time and place, and by its very nature must adapt and change" (page 562).

Couple that with messages we hear from the best. The best painters, writers, musicians, activists, thinkers ... that imitation is a valid and solid way to get into it. To move from a state of "I don't know how to begin" to a state of "I'm doing it" as we imitate the best.
There's an article out there somewhere by Joe Hill (son of Stephen King) who shares that the way he got into the flow of writing was to first sit down and transcribe excellent writing. Hill goes onto explain that after transcribing, the writer has to learn how to veer off and start writing his/her own words, with the benefit of having felt how superb sentences feel on the fingertips.
TRAGEDY
In THE ART OF CRUELTY by Maggie Nelson, we learn that Aristotle defines tragedy as an imitation of an action. Such a jolting synthesis by the one who writers and storytellers still turn to, as we pursue how to create compartments that make up the whole of a tragedy.
I can't help but think that this point by Aristotle is what Elaine deKooning was pointing to when she said that imitation done en masse transforms revolution into convention.
But she was also saying that the tragedy of imitation happens:
Posted by Jenny Doh at 11:32 AM