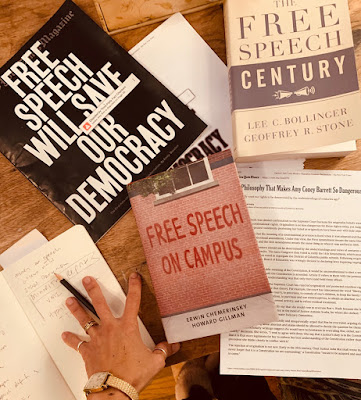 Emily Bazelon reminds us in her piece (Free Speech Will Save Our Democracy, NYT Magazine, October 13, 2020) that President Obama encourages us to allow all speech to occur, no matter how offensive, as we strengthen our speech so that the best ideas emerge as the most credible. Bazelon also reminds us of historically foundational thinkers upon which Obama's assertion rests, including Justice Oliver Wendell Holmes who in 1919 said "The ultimate good desired is better reached by free trade in ideas" and John Stuart Mill who wrote in (On Liberty, 1859) that it is wrong to censor ideas, because knowledge arises from the "clearer perception and livelier impression of truth, produced by its collision with error."

In Chapter 2 of The Free Speech Century by Lee Bollinger and Geoffrey Stone (2018), we find an essay titled Every Possible Use of Language? by Frederick Schauer. In it, Schauer cites Holmes as having given us the enduring idea that speech can be restricted on alleged dangerousness only if the danger is "clear and present." Most of us have understood this point by understanding the example he used to make this point, which is that no one is free to shout "Fire!" in a crowded theater.

What makes these traditional tenants of free speech challenging today is 1) the grotesque advances of technology that cause false information to spread like wildfire and 2) modern leaders like Donald Trump whose penchant for totalitarianism cause him to spread outlandish propaganda one day and on another day (when confronted by irrefutable proof of his earlier falsehoods) takes oblique and cynical cover by saying "I was just joking."

Schauer argues that the First Amendment "cannot have been ... intended to give immunity for every possible use of language." In other words, some language is beyond the grasp of the First Amendment's protections. For example, when Trump's language inspired domestic terrorists earlier this year to devise a plan to kidnap and murder Governor Gretchen Whitmer, it would be hard for the First Amendment to kick in and regulate that speech because in the moment of Trump's language, dangers are likely speculative and likely distant. Not clear enough. Not present enough.

The good faith argument that all speech ought to be allowed in order for the best idea to win (a la Mill, Holmes, and Obama) may need further examination as we confront a modern context where our social media channels fuel the growth of totalitarian leadership-based dangers. Dangers that might not explode in the now but dangers that are dangerously flammable and uncomfortably adjacent to this moment.