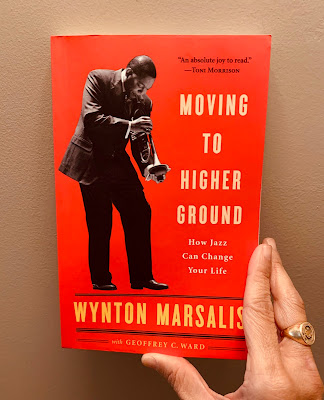 In chapter 7 of his book Moving to Higher Ground, Wynton Marsalis describes a time when he was teaching improvisation to a group of shy kids by saying to them: "It's so easy. Just make up stuff. Yes, play anything that comes to mind, fingers, or lips. Louder! Wilder! That's it. You're improvising." And after the kids produced a cacophony of free-spirited but painful-to-hear sounds, Marsalis added: "I told you it was easy. It's only hard if you want it to sound good."

Earlier in the book, Marsalis recounts a time when saxophonist Frank Foster called for a blues in B-flat during a street concert with other musicians when a young tenor player began to play "sounds that had no relationship to the harmonic progression or rhythmic setting," causing Foster to stop him:

"What are you doing?"
"Just playing what I feel."
"Well, feel something in B-flat, motherfucker."

Marsalis explains that jazz is about—expressing-accepting, reacting-accepting—on repeat. Like when a trumpeter plays what he/she feels in the moment, followed by say a bassist reacting to what has been played by playing/expressing what he/she feels about it. And on and on. When all members of the band strive for the balance of expression-acceptance-reaction within the company of practiced musicians striving for excellence, jazz enters a nirvana called "swing." In swing, no single player hogs the stage with endless solos. In swing, players give and take, back and forth, without compromising sincerity of the heart and soul.

Swing in jazz reminds me of "swing" in rowing crew as described in The Boys in the Boat by Daniel James Brown. Crew is not a sport for individuals to show off solo strengths. Rather, it's a sport where individuals become one unit by making modifications as needed ... where a rower with a shorter reach learns to reach longer, and a rower with a longer reach learns to foreshorten his/her reach so that every rower can be in synch, causing the boat to attain a rowing nirvana called "swing."

Marsalis states that not all musicians respect the swing, which he likens to the state of our democracy: "Balance is required to maintain something as delicate as democracy, a subtle understanding of how your power can be magnified through joining with and sharing the power of another person."

In other words, it's not just about the freedom to belt out whatever the hell one feels.

It's also about belting out what one feels in collaboration and cooperation with others, in the right key and with awareness of context, motherfucker.