BOYS IN THE BOAT by Daniel James Brown 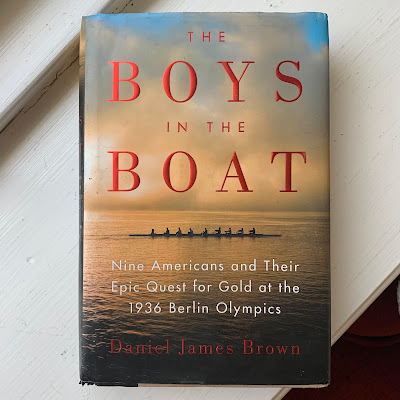 OARS IN WATER
In college, my favorite professor said to me that if I cared about an issue, I needed to keep my oar in the water. He asked me, are you gonna fight to direct the boat or are you going to let others determine its course? And if not in college, when are you going to practice your strokes? Because it won't get any easier once college is over. In other words, he was asking whether I was going to stay in the discourse during class discussions (especially when it got heated) and use my voice, or give up. Yes, the difficulty.Yes, the exhaustion.

GOLD
THE BOYS IN THE BOAT by Daniel James Brown is a book about the crew of eight from the University of Washington that went to the 1936 Olympics in Berlin. And against all odds, this crew out-rowed the German crew, the Italian crew, and every other crew to bring home the gold, and in the process discombobulating Hitler's confidence in his boats.

In telling this story, Brown shares the unique qualities that make up this sport. It's not just about a high number of strokes per minute, but also about how strong and steady each stroke can be.

Synchronicity through modifications of individuals doesn't mean every rower is exactly the same. Actually, the diversity of each rower is valued:

When one of the boys in the boat named Joe was having difficulty finding synch with the other boys, he was advised by a mentor who said to him:


If you don't like some fellow in the boat, Joe, you have to learn to like him. It has to matter to you whether he wins the race, not just whether you do (page 235).

BLACK LIVES MATTER
I can't help but extrapolate how these truths about rowing apply to life, especially at this moment where our nation is waking up to what it means when we say "black lives matter." A concept so clear that some people uncomfortable with the power of its clarity manufacture absurd complexities about it on purpose.

Through the video footage of George Floyd's murder, privileged Americans are witnessing visual evidence of what has been conceptually discussed about for years. And the video is finally causing a broad coalition to realize that in order for our crew to succeed, it has to be about more than individualism. It has to be about WE.

REGARDLESS
And if my professor from years ago were still alive, he would be saying to we the coalition to keep our oars in the water. Regardless of the difficulty. Regardless of the exhaustion. Because at what other time than now will we have the chance to row such significant waters?
Posted by Jenny Doh at 5:45 PM