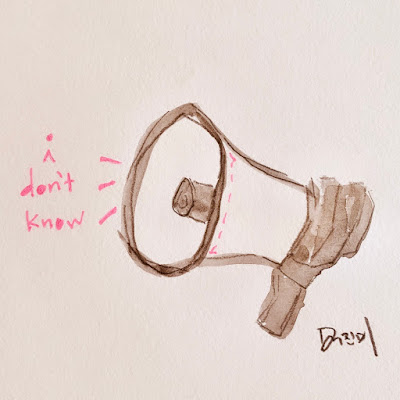 YESTERDAY
Yesterday, my daughter Monica and I joined our Santa Ana friends to participate in a multi-mile march to support Black Lives Matter and to support the seeking of justice for George Floyd, Ahmaud Arbery, Breanna Taylor, and countless other Black Americans lost to systemic racism. Andrea (one of Monica's closest friends from childhood) impressed me with her strong and fearless activism as she held a bullhorn and led a lot of the chants for all of us.

At one point during the march, Andrea shouted "What do we want?"
And we shouted back "Justice!"
"When do we want it?" Andrea continued.
"Now," we yelled.

And then she shouted something that I'd never heard at a march: "How do we get it?"

And as soon as that question came out of Andrea's bullhorn, we all started looking at each other as many of us started saying to one another "I don't know." I also said it to people around me: "I don't know."

TODAY
Today I woke up with blisters on my feet and opened the link that contained President Obama's remarks about our current situation. His words served as a balm for me and many others I'm sure, as we remain parched to hear words from our leaders that can start healing and motivating us. One of the things he said was as follows:

"If we want to bring about real change, then the choice isn't between protest and politics. We have to do both. We have to mobilize to raise awareness, and we have to organize and cast our ballots to make sure that we elect candidates who will act on reform."

THE OTHER DAY
The other day I listened to a great episode of Esther Perel's podcast where she was providing marriage counseling for an American couple living in Nigeria during this pandemic. As the couple shared their relationship challenges, one big takeaway that Esther helped facilitate is that sometimes, when one spouse is hurting, the other spouse might feel the need to "solve" the hurt.

But the thing is that sometimes there isn't a clear cut solution and sometimes, the solution comes from a place different than the spouse. Or sometimes, there may be a road toward a solution but rather than playing savior to the problem, the most helpful thing that a spouse can say is as follows:

ALSO TODAY
One of my good friends Shamanie checked in with me to see how my family is doing. She knows that my husband has had some major health issues, including a recent emergency scare where he spent some time in an Intensive Care Unit. Shamanie asked me "Can I order food to be delivered for your dinner to give you a break?" And I said "Thanks but I'll save that offer for a future rainy day." And she said "I'm here for you." And I said, "I know. Just knowing that you are is a balm."

TOMORROW
I don't know the answer to the question that Andrea stated through the bullhorn. The question on all of our minds.

But I think "I don't know" is a valuable and valid response and I think President Obama is correct. It's not protest OR politics. It's protest AND politics. It's staying engaged and educated and using the gifts and skills that the universe has bestowed upon me to be a balm and authentic ally. To stay engaged, work on my heart and correct it as needed, live out my values instead of over-editing myself lest I rock the boat. To practice virtue rather than just signaling it and using all that this universe has given me for this very brief life (my art, my writing, my teaching, my music, my family) to support protest AND politics in a direction that feels right and just. Not to try to overreach my role and become the savior with the solution but a strong and fearless ally who can stand up and with and say "I'm sorry. This sucks."

To give my money to progressive Democrats. To have ready my comfy shoes if there is a march to show solidarity. To make brush strokes on a canvas to help illustrate what the fuck is going on. To sing a song that might comfort someone. To order dinner for a friend if she needs and wants it. To make these investments today because of tomorrow. It's coming fast.

Email ThisBlogThis!Share to TwitterShare to FacebookShare to Pinterest
Labels: Art and Activism, musings