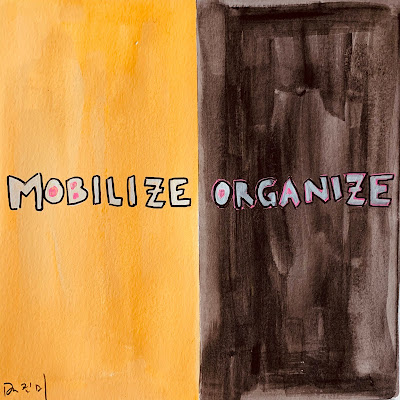 MOBILIZATION
I've been reading a book titled No Shortcuts: Organizing for Power in the New Gilded Age by Jane McAlevey. McAlevey is an extraordinary union organizer who has lots to teach about how to bring about change.

The most mind-blowing takeaway for me has been that mobilization is not organization.

Examples of mobilization include: marches, rallies, putting a black square on our social media handles, and protests at airports (to name a few). People can be mobilized rather quickly because people only need to read a headline to get fired up and then to show up. Sometimes, they don't even need to read a headline. I remember when I was a graduate student at UCLA and there was an issue that some of us were thinking about protesting. And one of my colleagues said "Do we want a bunch of people to come and get naked? I know a bunch of people who will do that if I just give them a call."

We saw mobilization happen when Trump issued Executive Order 13769 in early 2017, also known as The Muslim Travel Ban. Thousands of people mobilized in airports to protest this ban. It happened fast and it took my breath away to witness what I view as our nation's salt of the earth decide quickly to come out and stand up for justice. Prior to the airport protests was the Women's March when the entire world mobilized to march and protest the sinful administration.

ORGANIZATION
What makes organization different from mobilization is that it takes a very long time. It takes lots of conversations not only about how nice or mean an individual is, but how functional or dysfunctional systems are.

This morning on The Daily NYTimes podcast with Michael Barbara, I was blown away by the reporting by Shalia Dewan who presented eye-opening information about why it is almost impossible to create positive reform within law enforcement.

President Obama released his statement about our current crisis a couple of days ago. In it, he said:


"If we want to b ring about real change, then the choice isn't between protest and politics. We have to do both. We have to mobilize to raise awareness, and we have to organize and cast our ballots to make sure that we elect candidates who will act on reform."

This afternoon, President Obama provided comments via television to underscore the importance of both mobilization (which is what we are seeing all around us) and the difficult and arduous work of organization. I think the organization part has many prongs. It's organizing to vote and get good people into office. It's also thinking locally and talking with neighbors about a matter like police reform, use the points that journalists like Dewan unearth, and then latching onto our city leaders and not letting them off the hook for a very long time until reforms are made.

LISTENERS
McAlevey notes that the way to find the true organizers in a movement is to find the ones who are listening, not performing. Organizing leaders listen more than they speak, they read and think and converse in order to understand the complexities of an issue, and they dig into the work with a tenacity that lasts not a day or a week or a month ... but years. A lifetime, actually.
Posted by Jenny Doh at 4:54 PM