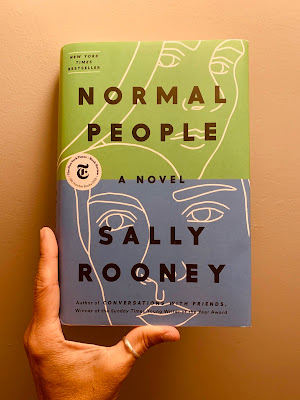 It can be argued that the enlightened embrace concepts like:

Normal People by Sally Rooney is a book where not one word is written unless it's severely needed to tell the story of Marianne (shy and from a rich family) and Connell (popular and from a poorer family). It's minimalist. The words, the plot, the characters, the timeline.

Perhaps it's the absence of the superfluous that the reader is able to see and feel the gravity of what might usually go unnoticed or be deemed as"no big deal."

Am I more than my story? Maybe. But maybe I am also very much my story. A story with highs and lows. A story with characters of all sorts. The good ones and the horrible ones. A story that exists, even if I shout at it that I'm more than it. Because in my quiet, I know that even if other things are about happen to me, what has already happened will always be so.

Does the past not define me? Maybe. But maybe it influences me. Like the influence that Marianne's father's violence has had on Marianne, her brother (Alan), and her mother (Denise). Maybe it influences me to inflict it (like Alan), to receive it (like Marianne), or to deny it (like Denise). The violence, that is.

But maybe as I learn to survive the normalized abnormality of it all, I learn the beauty of awareness and the power of coping. And in the face of having to endure another painful thing, I realize that I can face it. I can survive it. I can grow from it. Because I've already been through worse. My story tells me so.