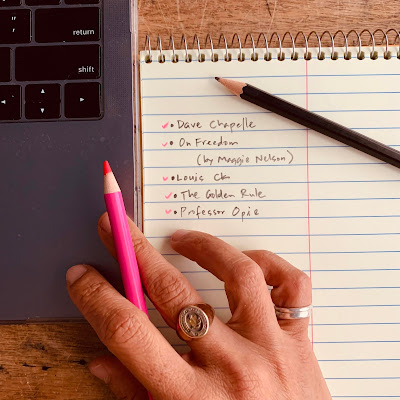 DAVE CHAPELLE
Once in a rare while, I find myself in the company of white people who use the N-word as if it's no big deal. They are also usually quick to reveal their love of people like Dave Chapelle to perhaps establish some kind of street cred—like they're using the word not because they're freaks but because they're cool, progressive, and free. And I say to them: "STFU. You're not Dave Chapelle. And you're the opposite of cool."

Some might argue I am the unreasonable in such scenes, imposing restrictions on people's right to free speech. After all, even the couhl should be free to say whatever they want, whenever they want.

ON FREEDOM
In the first chapter of On Freedom by Maggie Nelson, I learn about a classroom scene with instructor Catherine Opie at UCLA where a student criticizes the work of another, accusing it of being colonialist. The criticized student:

"appears dejected, and mumbles from the corner, 'Damned if I do, damned if I don't.' Opie then hectors him kindly: 'Stand up for your work! ... Open it up! Don't shut it down, man.' Opie is not counseling the student to become a rigid, narcissistic jerk unable to absorb any deconolonizing critique. She is just reminding him that if you truly think your art is worth it, you've got to be willing to stand beside it and up for it, rather than slink into the all-too-familiar postures of woundedness, defensiveness, paralysis, or retaliatory aggression."

LOUIS CK
I just bought tickets to go see Louis CK in a few weeks at Long Beach. Yes, he's touring again. And yes, I can't wait to hear what the first words out of his mouth will be, after this long stretch of silence. Not that he's been COMPLETELY silent. I've kept up with his occasional funny missives and endearing podcast with his French girlfriend that he released for people who have stayed on his mailing list (like me).

Some people express disdain for my continued interest in Louis. And the point I try to make is that maybe he has realized that in this day and age, taking his penis out in the company of others is not ok. And that we ought to allow one another the opportunity and space to realize things.

THE GOLDEN RULE
The other point I try to make is made by referencing The Art of Cruelty, also by Maggie Nelson, where she cites philosopher and composer John Cage who argues against The Golden Rule: "I think the Golden Rule, which is often thought of as the center, really, of Christianity, is a mistake: Do unto others as you would be done by. 'I think this is a mistaken thought. We should do unto others as THEY would be done by."

In other words, who is anybody to say that everybody should be treated or behave a certain way based on anybody's preferences? At the grocery store, the office, the theater, and of course in bed. What is the Golden Rule in bed? Slow and gentle? Or rough and tumble?

PROFESSOR OPIE
I think what Professor Opie is saying to the criticized is to not cower away from robust debate. Take the criticism and potentially revise OR push back with intellectual honesty as you influence a critical mass to see the genius in your masterpiece.

Like Sarah Silverman, I wouldn't have been upset if I had been in that room with Louis. But because some did get upset, it means that it's upsetting to some. And if Professor Opie would have been in that room, she might have told Louis to fight for his right to do whatever he wants with his penis OR she might have counseled him to make realizations about the times and The Golden Rule. And then to revise.