Things We Lost to the Water by Eric Nguyen 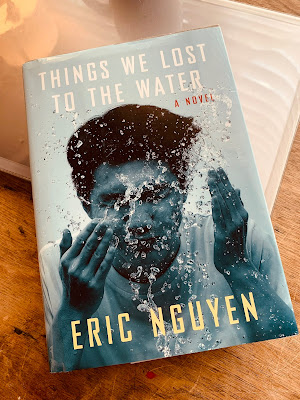 NEAR-DEATH
I have a memory of when I was a little girl in Korea, maybe when I was four or five years old. My family joined other families to vacation at a beach and though my memory of that time is foggy, there is a scene from that vacation that is horrifyingly vivid. That's when I stepped into the ocean by myself and nearly drowned. There is a photo of my parents pulling me out, with Dad holding my hand, Mom holding my other hand. My face looked contorted as I was managing many emotions including fear, anger, gratitude, all at the same time. Because I was so young I don't think I felt embarrassment. I knew deep inside that I had almost died.

I have another memory of when I was older, relocated in America. Maybe third or fourth grade. I was in a pool with my brothers and family friends. I still didn't know how to swim and there was a split second where I stepped one step too far and the bottom of the pool disappeared and I was drowning. I panicked and said a quiet water-muted "h lp" with flailing limbs. No one heard me. Thankfully, my flailing shifted me enough for me to feel the bottom of the pool again and I was ok. I stepped out of the pool and my much more self-conscious ego pretended that my near-death experience hadn't happened.

THE BOAT
Things we Lost to the Water by Eric Nguyen is about roots, relocation, losses and near-losses with water always close by. Water is close by when in 1979, pregnant Huong boards a boat with her little son Tuan to escape the Viet Cong. The plan had been for her husband Cong to also join the boat but at the last minute, Cong doesn't board. The memory of whether the inclement weather and chaos of the moment prevented him from boarding or whether he simply chose to stay behind remains unclear. This murkiness causes Huong to create a false narrative to have her now two sons Tuan and Ben (born after their relocation to America) believe that Cong didn't choose to be somewhere other than with his family.

The trauma of relocation affects Huong, Tuan, and Ben differently. It's hard to be uprooted. Even harder to grow new roots. And for most of the book, we see these three souls limp along as they navigate their sapling selves in New Orleans.

HURRICANE
When Hurricane Katrina hits New Orleans in 2005, there are harrowing scenes of Huong frantically searching for higher ground while also trying to locate Tuan and Ben as the town is literally and speedily drowning. In such life-threatening moments, what is a good mother to do? Is it to make a decision to take a step to ensure her survival? Or is it to take the opposite step to search for her children and potentially risk her life?

In the hurricane, Ben and his partner find unexpected refuge in the home of an elderly man. They knock on the door of his still standing house and he lets them in with a smile and explains that "When they announced the evacuation, I couldn't leave ... I just couldn't! I have roots here."

FILTHY BOHEMIANS
Several scenes before the hurricane, we find academically gifted Ben living in Paris, France as he pursues the romanticized notion of the Bohemian life that he read about in Henri Murger's book: Scenes from the Life of Bohemia. It's a voluntary and temporary relocation for Ben and he learns quickly and hilariously that the idealized Bohemians of Murger and real life messy and filthy house mate Bohemians in his Paris apartment are radically different.

SOMEWHERE
Back in the hurricane, relocation happens moment by moment. During a scene where Huong is catching her breath and not drowning, she pleads to a stranger that she has two sons. Where, she isn't sure. But she declares "They're somewhere. They're somewhere."

The somewhere where we are at at any given moment may come with gnarly roots. The kind that Ben describes as taking "a lifetime to make a place lived in." The kind that might prevent a person from evacuating a storm or a person from boarding a boat to escape political oppression in one's homeland, or a plane for the land of opportunity. Because, the person might wonder, how can I be sure that out there, with no roots, I won't drown? 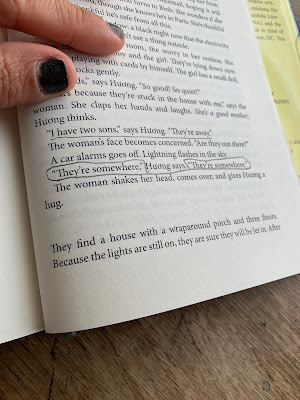