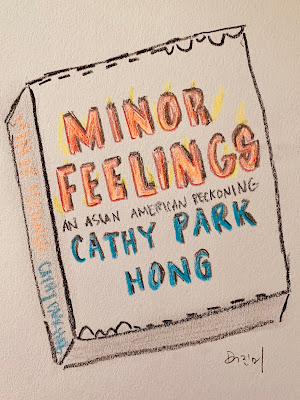 There is a passage in Minor Feelings by Cathy Park Hong where she explains to her friend Erin that "it's a problem how Asians are so private about their own traumas, you know, which is why no one ever thinks we suffer any injustices. They think we're just these robots."

The passage reminds me of one of my deepest traumas that occurred during my senior year in high school in Bakersfield. It was toward the end of the school year and I was sitting in my usual seat in the very back of Chemistry class with our teacher Mr. En trying to keep our restlessness on a low simmer as we were waiting for class to end, the year to end, and something new to begin. During one such afternoon, Bouncy Cheerleader Em was playfully teasing Mr. En asking him "Mr. En, will you remember us after we are gone?"

As Mr. En was surveying the classroom to select the student that he would name as an example of the forgettable, my stomach sank as I prayed silently and fervently: "Please God, please don't let him say my name. Please God, please make the minute hand go to seven so it can become 3:07 so the bell can ring and I can leave. Please."

From the time that Mr. En uttered those words until it became 3:07, everything seemed to go in slow motion. My affect flattened but everyone else seemed to be just fine. Nothing about that moment horrified anyone else but me. I wanted to die and I wanted to appear perfectly fine all at the same time. I kept that trauma private and allowed people to think that my robotic self hadn't been hurt.

Like most Korean Americans, I was raised with a belief that it is a virtue to quietly endure. In Korean culture, the word is 차마 (pronounced chamah). Where no matter how deep it hurts, we endure it. In a scene where her artist friend Helen experiences deep trauma, Park Hong wonders whether Helen is going to kill herself and then remembers that stronger than Helen's "will to die was her will to endure" and that "This was the most Korean trait about her, her intense desire to die and survive at the same time."

Other related Korean virtues include 고생 (pronounced gohseng) which means to suffer, and the ability to repay 신세 (pronounced shinseh) which means indebtedness. It is no wonder that to endure, to suffer, and to repay debt are the virtuous cornerstones of the Korean people. Historically, we are a people who have been occupied, divided, and underestimated. And quietly, we have endured, suffered, and worked diligently to repay real and perceived indebtedness.

Park Hong describes the dynamic of how language of the dominant and the language of the dominated develop differently by saying that "English tuned an experience that should be in the minor key to a major key; there was an intimacy and melancholy in Korean that were lost when I wrote in English." For me, it's not just in the written word, but in the spoken word, where in English, I find more know-it-alls who for whatever reason wake up every morning and decide that it is their job to shout out answers to questions that no one has asked of them. Because they know it all. All the time and always in the hyper major key.

But put them in a room with a Mr. En who publicly characterizes a quiet Korean American girl as forgettable and they won't say boo, because as Park Hong cites Robin Bernstein's book Racial Innocence, "Innocence is not just an 'absence of knowledge' but 'an active state of repelling knowledge,' embroiled in the statement 'Well, I don't see race," where I eclipses the seeing."

Maybe that's why we Koreans are frequently silent. Because in many ways, forgetting Mr. En through silence is easier than remembering him and all the inattentive witnesses through rage. But says Park Hong, "The problem with silence is that it can't speak up and say why it's silent. And so silence collects, becomes amplified, takes on a life outside our intentions, in that silence can get misread as indifference, or avoidance, or even shame, and eventually this silence passes over into forgetting."