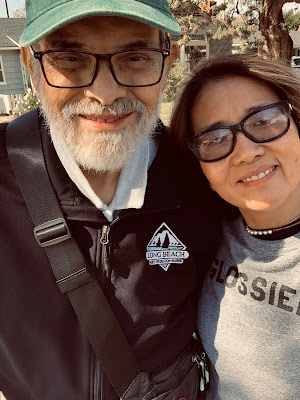 As I am writing this, I'm amazed that the immediate past moment was one where Gerardo and I took a mini walk right outside our house. Maybe it was a quarter of a block. Maybe it was an eighth. The sun and air felt fresh. I saw evidence of wind's existence by looking at the moving leaves. Immediately before that, he devoured the lunch I made him.

And now, immediately after the short walk, pain and discomfort are back. Maybe Tylenol will be all he needs. Or maybe oxycodone. Or maybe the pain will become a runaway train so far gone that we end up at the hospital.

Two good moments in a row, followed by a bad one.

Sometimes, when the pain becomes the monster that it can be, his cries take on a sound that no one should emit and no one should hear.

Two things that seem to comfort Gerardo is his copious note-taking and newfound faith. These days he writes every single thing down in his kraft-colored Moleskine and #2 pencil. Everything that he observes and everything that happens to him goes into that journal. Sometimes when he's really out of it, he will look at his notes and see illegible marks he made in his altered state and laugh. But so what? It's not the precision of the notes or their efficient retrievability that comforts him. It's the PROCESS of taking them that comforts him.

He recently thanked me for not judging his newfound faith but rather supporting it. Though I don't share his faith, I don't think it's certainty that comforts him, but rather the PROCESS of opening himself up after having been closed for so long, as he experiences a genuine shift from possibility to the thrilling probability of something greater.