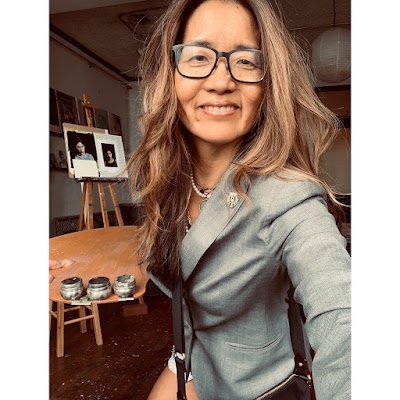 PHOTO: Me in my art studio after an inspiring teaching session.

I love watching home video footage of my son Andrew when he was a little tyke, barely learning to talk. In one particular scene, he comes running toward me to say: "Mommy! Andrew! Chocolate!" It was Christmas morning and he saw that his older sister was eating special chocolate that she had found in her stocking. Of course he also had the same chocolate in his stocking. He just didn't know that yet, and he needed to urgently tell me he didn't want to be left out.

The video reminds me that when we are learning a language, we first start by speaking in nouns. Eventually, little tykes become toddlers then adolescents and then adults. And sentences contain not only nouns, but verbs and adjectives, embedded in a variety of tenses. We learn in language acquisition that without context, nouns alone can be interpreted in many ways and often misunderstood when taken out of context.

When I teach painting, I see something similar happen to new painters. With portrait work, I see painters looking for nouns to paint. "Nose! Eyes! Mouth!" After much practice, the painter is able to create the context and the space in which the nouns exist. And eventually with practice, the painter is able to see that even when you don't paint an explicit nose, painting its shadow communicates the noun.

In How to Do Nothing, Jenny Odell draws a parallel between language acquisition to activism.

It makes sense that at first, activism feels like a field of nouns. "Earth! Feminist! Racism!" As activists connect with a community where space to think can be found, we create strategies to direct our attention rather than having our attentions be directed. And by doing so, creating contexts that inspire awareness and incubate change.

It is a long-term practice that leads a tyke, a painter, an activist, to eventually be able to acclimate to create the most breathtaking form of nuanced and sophisticated context. I liken it to conjugating a verb into the subjunctive. Where we can express states of current unreality (like a wish or possibility) so clearly that we start building a road to making it reality.
Posted by Jenny Doh at 6:44 PM