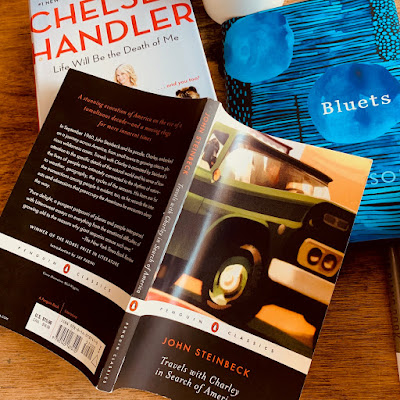 I'm halfway through the delightful book: TRAVELS WITH CHARLEY by John Steinbeck and can't wait to finish the rest of it this week. When I'm done, I'll do a full review but at this halfway point, it feels right to talk about a sentence by Steinbeck on page 57: "Perhaps this was weak of me, but I wanted to get on with it."

Made me think how "getting on with it" or "moving on" or "moving forward" or "getting over it" are sentiments our world aligns with strength and courage. Such sentiments seem to land when we are in the middle of sorrow or rage ... where either our own voice or the voice of another whispers into our psyches to "buck up and handle it" or "enough of your sobbing" or "choose happy" ... or "it's time to move on."

That kind of voice might have contributed to Chelsea Handler bucking up after her brother's untimely death, causing her not only to move on but to move on frantically and at lighting and unending speed. Maggie Nelson references this kind of phenomenon of society equating moving on with being strong, resulting in people saying to her injured friend who has become a quadriplegic shitty things like "We're only given as much as the heart can endure." Perhaps unintentionally shitty but shitty nonetheless.

I think it's important that Steinbeck references his decision to move on as potential weakness.

Chelsea Handler came to realize decades later that she needs to stay a while with her grief about her brother. And through therapy, she finds a way to go back and feel the sorrow and anguish of having lot him. And then moving on not by covering all that up but keeping it and her path forward illuminated

The process can't be rushed. And I think it is kind of weak not to be able to face the sorrow/rage and try to get on a fast-track to joy.

It might appear to be strong if I am able to stand back up after a fall but perhaps it's strong to first stay on that ground, to roll around in the dirt, scream out loud, tangled hair, and dirty face. I've seen that when I let all the hurt and rage have center stage when they want it, they eventually don't want it anymore. Which is when the brewing coffee can be smelled. And the steam of a shower can be felt. And the hope of the sunrise understood not because the hurt is gone but because it was not denied.
Posted by Jenny Doh at 2:31 PM