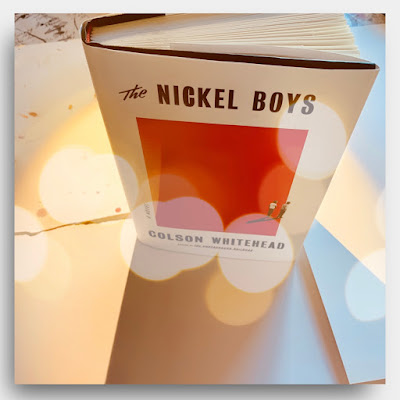 After plowing through part one of The Nickel Boys by Colson Whitehead, I was interrupted. A good interruption requiring me to put the book down and go meet a friend for coffee. I texted my friend before leaving to say "I just finished part one. I think this break will do me good cause I can feel that parts two and three are gonna knock me out."

Part one had developed a protagonist character in Elwood who I started to care too much for. That's always step one of getting knocked out, I think. Caring too much. What I love about the caring I feel when reading Whitehead's work is that it's not developed through hyperbole or melodrama. It's through literary restraint.

Prior to being unjustifiably picked up and placed in a "reform" school in Tallahassee called The Nickel Academy, Elwood's future looked bright. Through the love of his grandmother and the speeches of Dr. Martin Luther King Jr. that he listened to on repeat, dignity became his north star. And once he was at Nickel, he planned to achieve faster than others in order to be quickly released. That was his plan. "That was his resistance (page 62)."

But what The Nickel Boys made me grapple with, given its true nature as a facility that brutally abused and killed its detainees is this: What happens to noble north stars and dignified resistance when undignified people are in charge of systems designed to keep you down?

For Elwood, what happens is that IN ALL THINGS, even in the face of unfairness, the dignified decide to act with hope by continuing to create context. Because isn't it context that MLK Jr created by writing the letter from the Birmingham jail? And isn't the journal that Elwood kept writing at Nickel also an act of creating context in hopes that people who care, people with dignity, will one day understand? As Elwood explains: "One thing gave birth to the other--without the cell, no magnificent call to action (page 193)." A truth that gets to the heart of scripture that says not "FOR all things" but rather "IN all things give thanks (I Thessalonians 5:18)."

I personally toggle back and forth from Elwood's hope and his friend Turner's cynicism. Conceptually from peace to violence. Practically from love to hate. It's so dizzying sometimes that I feel close to being knocked out.
Posted by Jenny Doh at 12:39 PM