AFTER DARK by Haruki Murakami 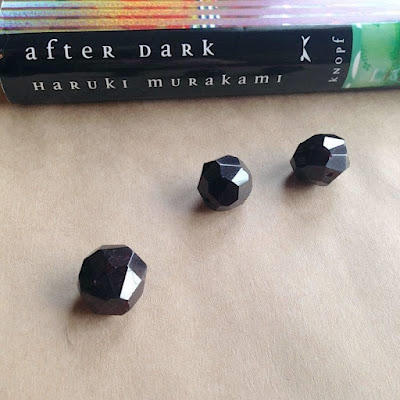 (The essay below was first published August 22, 2016 on my former blog. I am republishing it here, my current writing platform.)
There's a story that is told by one of the characters in Haruki Murakami's book: After Dark. I won't be spoiling the essence of the novel by sharing this one story, which concludes with two interesting morals. The story goes like this ...There are three brothers and each of them are given a boulder. They are told that they need to push their respective boulders up a mountain and where they stop is where they can build their respective homes. They are told that if they can push the boulder up as high as possible, they will be able to see the best view they could possibly ever know.So the three brothers start pushing. After a while, the first brother stops and decides to build his house where he stops. He tells his other brothers to continue pushing their boulders but that he will be ok where he is at, as he will be able to live off of the fish that swim in the bodies of water near his spot. He accepts his spot and is content with the idea that he will never know the best view.So the other two brothers continue pushing. After a while, the second brother stops and decides to build his house at a spot higher than where the first brother stopped but not at the top of the mountain. He tells his other brother to go on without him but that he will be ok where he is at, as he will be able to live off the fruit trees near his spot.The third brother pushes his boulder to the very top of the mountain. He finally is able to know the best view that can only be seen at the top and indeed, it is magnificent, and it is there he builds his house. For sustenance, what he has available is moss to eat and icicles to suck on.The person telling this story points out that there are two morals to this story. The first one is that "if you really want to know something, you have to be willing to pay the price." The price for the third brother being moss and icicles in exchange for the best view.The second moral of the story is that ...everyone is different.I think that the second moral is so important. We are all different. Even if the symbolic boulders we push are exactly the same (which they are not), our limitations are different, our goals our different, our priorities are different.This second moral gets to a point that I've been pointing out for the last few years, which is that I reject messages from the universe that tell me to go to the top of the mountain or to "go big or go home."Because you just never know. Eating fish on flat land may have its own nirvana that those who suck on icicles at the top don't ever get to enjoy. Big isn't the best. Small isn't the best. Medium isn't the best. Because we are all different. And who says real views are better than imagined ones?
Posted by Jenny Doh at 1:23 PM