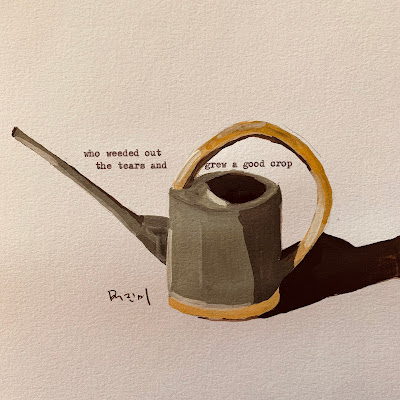 ROSE & THORN
Last week during our zoom discussion for the Summer 2020 online Art & Activism class (Unit 4), we did an "around the table" closing exercise where we talked about what each of our roses of the moment and thorns of the moment are. Some of the responses got us roaring with laughter, while others got us a bit contemplative and teary.
My contributions were as follows:
GARDENS
One of the through lines for many of the responses had something to do with people's gardens. From the challenges of keeping pests away, to the glories of harvesting cucumbers and making them into homemade pickles, I realized that keeping a garden requires constant upkeep.
For the last year, Gerardo has started dabbling with a vegetable garden that he grows in small pots. He is growing zucchini, tomatoes, and a few herbs. Every morning I see him go outside to tend to his garden and when he enters the house, he has stories to tell about caterpillars, wasps, worms, the sun, the dirt, water, and weeds.
PROTESTS
Recently, I made a painting to honor the Wall of Moms who have been out in Portland protecting its protesters. The person who bought the painting is an actual mom from Portland. During our interaction regarding the sale, I learned that she has been protesting for decades since her first protest against the Vietnam War in the 1970s.
Her biography made me think about some of the signs I've seen during protests that I've marched in. The ones held by older humans who have been marching for years as they hold up signs that say something like: "I can't believe I have to explain this shit AGAIN."
EMPTY GARDEN
All of this made me think about the song Empty Garden by Elton John  (a tribute to John Lennon) which starts off like this:

To be an activist is to be a gardener. It's about pulling weeds, controlling pests, and optimizing a social context so that greed and oppression and authoritarianism do not take over. Activism, like gardening, is constant. It's challenging. It's rewarding. It's never-ending. And if we are lucky, when the world looks upon our lifelong dedication to activism, it will recognize that we must have been gardeners that cared a lot. That we weeded out the tears. And we grew a good crop.
(Art: Gouache and typing on paper)
Posted by Jenny Doh at 5:02 PM