THE BLOOD OF EMMETT TILL 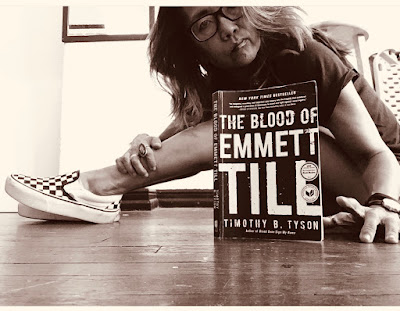 (This essay was first published on my IG account August 11, 2018. I am republishing it here, my current writing platform.)
We’ve known about the brutal 1955 lynching of #EmmettTill at the hands of two white men presumably defending the honor of a white woman (Carolyn Bryant) who at the time testified that Till whistled at her and grabbed her wrist to potentially rape her. The murderers were acquitted. And then in 2007 Bryant recanted her testimony. And said “Nothing that boy did could ever justify what happened to him.” 50. Years. Later.The author Timothy Tyson presents this history of America with a rich context of what it has been like in terms of race relations in America. It’s an essential read especially for anyone who scratches their head about the #blacklivesmatter movement and thinks that “In the beginning there was Black Lives Matter and angry black people.” No. In the beginning there was slavery. And ongoing brutality toward black people (the list is long) at the hands of white people. Efforts to suppress the black vote (which still goes on and why it’s important to get the vote out). Segregation. And round and round it goes.
We can pretend this history doesn’t exist and that players who kneel like #colinkaepernick deserve to be excluded from the @nfl . Or we can face this history and understand.
Posted by Jenny Doh at 9:56 AM